COLLWEB is a global network of collectors that builds a community of people who appreciate the value of art, cars, watches and real estate.

David Tycho was born in Vancouver, Canada, and later attended the University of British Columbia, where he studied painting under renowned Canadian artist Gordon Smith

After working through a number of Modernist styles, he arrived at his personal interpretation of figurative expressionism, which remained his focus until moving to Asia in 1984.

In Japan, Tycho was exposed to Shodo, a Japanese style of calligraphic painting. He was particularly intrigued by the paintings of Zen monks, whose fluid, gestural brushwork often rendered the characters illegible, and ultimately abstract. At the same time, he was also inspired by the paintings of Robert Motherwell, Franz Kline and Willem de Kooning, and David soon began to explore abstraction for himself.

In 1990, David began working through a number of abstract styles: from gestural, painterly expressionism, to hard-edged minimalism.

In 1995 Tycho began making frequent treks into wilderness areas: from the austere deserts of California and Nevada to the coastal rain forests of British Columbia, Washington and Oregon. Forms and colours of the natural environment found their way onto his palette, and, in combination with intuitive aesthetic impulses, the resulting works were a synthesis of landscape painting and abstraction.

A trip to Asia in 2011 rekindled David’s interest in the Orient, and his Japan Series was informed and inspired by this. The paintings are more figurative in nature, containing a number of recognizable Japanese themes and motifs.

From 2012 to 2016, Tycho’s work took on a markedly urban look, inspired by the paradoxical nature of large cities—environments that he interprets as being alluring but at the same time potentially alienating.

A return to landscape inspired painting in 2017 led to his Fire and Rain exhibition, a semi-abstracted account of a 9,000 km solo journey through western North America.

David now explores the variety of environments and phenomena that he encounters in his daily life. He is most interested in the ambiguity and tension that exists in the seam between abstraction and figuration, as he continues to expand his understanding of form, colour, gesture, and paint application.

In addition to being an artist, David is an often-published writer of articles on art, social issues and wilderness travel, and winner of a Canadian Literary Award. He has also been interviewed on radio, television and for print media numerous times. 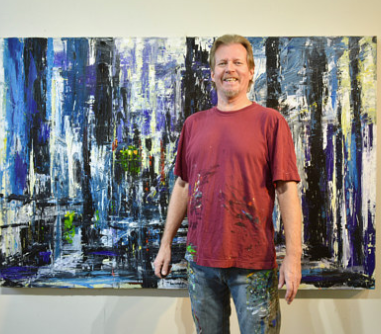